Donald Byford (who had an agricultural background) came to Leicester in 1914 from Clare, a small village in Suffolk. He worked for a local sock manufacturer named Myhill for five shillings (25p) per week. 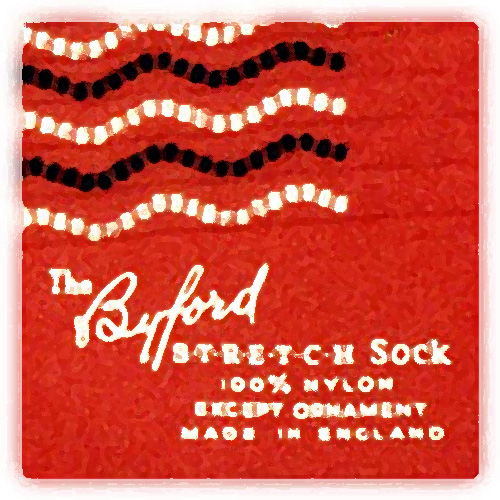 He enlisted in the army serving in the Tank Corps during World War One and was demobilized after having been injured.  His father Charles provided the necessary capital and in 1919 he commenced business on his own account, making socks with a workforce of two in an eight room building in Bedford Street, Leicester.  Donald rented off unused rooms until they were required for expansion.

Despite the recession in the early 1920s the firm survived and then progressed rapidly.  In 1924 Byford bought a large tract of land on the corner of Blackbird Road and Abbey Lane, and built a factory in an area that was then on the fringe of the city.  This low-rise building was in concept very different from the multi-storey factories that were common at that time in the more densely populated areas of the city.  Ultimately the site covered 110,000 square feet.

In 1923 Donald Byford visited America and eventually the firm developed its own sales and distribution organization, maintaining stocks of socks in New York to service customers in the USA and Canada.  Backed by extensive advertising the firm enjoyed further success, selling under its own brand name Byford in the UK and world wide.

The 1930s were difficult for the industry but Byfords remained viable and in the late 1930s, with the coming of war, production was curtailed and the firm concentrated on Utility socks and military contracts.  It was during this time that the most popular range, the Byford 98 shrink resisting comfortable wool sock, was developed for its post-war launch.

Following the war there was a shortage of workers in Leicester and in response a factory was set up in Maltby, Yorkshire.  This was a joint enterprise with the famous Aristoc Company who made women's fine-gauge stockings.  In 1952 Aristoc decided to withdraw, enabling Byfords to re-allocate a large floor area at Maltby to a new enterprise, the production of knitwear.  The Maltby factory was soon supplemented by factories at Louth and Immingham.

Byford's strategy had been to concentrate largely on designing, advertising, manufacturing and distributing to independent shops.  By the mid to late 1960s these were suffering serious decline in the High Street battle with the chain stores.  This change of trading pattern caused serious problems for Byfords (and the rival firm, Wolsey), and by 1966 the firm was losing money.

However, there was a return to profitability and in 1969 (by which time the workforce had risen to around 1800 employees) the chairman's son C D Byford took control.  In 1970 the board, who controlled 36.5% of the Ordinary shares, recommended the sale of the firm to Coats Patons.

Throughout its history the firm had maintained an ethos of high quality manufacturing and good service to its customers.  Eventually the brand name Byford was used by another firm outside the group.  The site was closed for manufacturing in 1999 as the industry was by then in serious decline.