The manor of Bradelei was given to Henri de Ferrieres by William the Conqueror following the Norman conquest. The family used the manor as a base for hunting and entertaining and its name evolved from Bradelei to Belper (from the French 'Beau Repaire' meaning beautiful retreat). 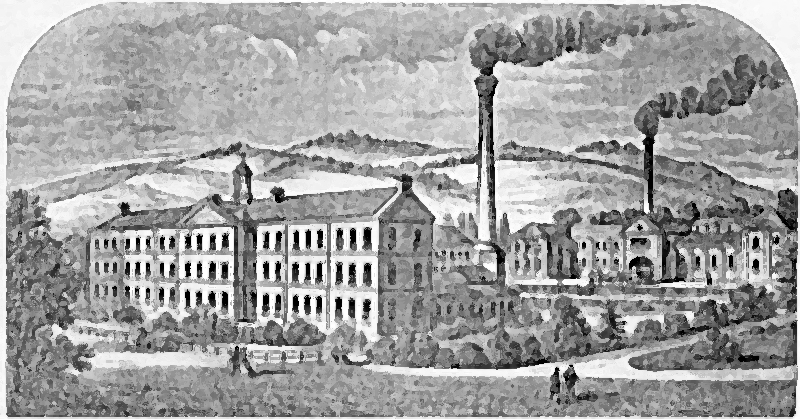 The availability of ironstone, charcoal and coal in the area provided metalworkers with valuable raw materials and Belper became a centre for nailmaking, possibly from the eleventh or twelfth century.  In 1314-15 the Duchy of Lancaster recorded two forges producing iron bars for chapel windows, nails and spikes.  Horseshoes and nails were supplied to huntsmen visiting the Royal Forest.

At the beginning of the industrial revolution Belper's population was only around 500.  A hundred years later in 1830 this figure had risen to around 8,000.  The construction of Jedediah Strutt's mills brought workers to Belper.  By 1792 Belper had five mills and new rows of cottages, such as Long Row and South Row, to house the workers.  The Strutt family also provided a chapel and schooling for their employees and child workers.

The availability of yarn from Strutt's mills encouraged the local knitting industry to expand.  John Ward followed his hosier father into the industry in the 1780s.  In partnership with James Sharp, Ward Sharp & Co. opened a warehouse in 1801 in London to sell goods produced in Belper.  By 1803 the partnership had been dissolved and a new one formed as Ward Brettle & Ward.  Later known as George Brettle & Co, the firm developed to become a major player in the knitting industry.  By 1830 the firm was the largest wholesaler in London.  The 1834 Brettles warehouse still survives in Church Street, Belper.

The railway reached Belper in 1838 when George Stephenson directed the North Midland Railway through the town.  A deep cutting was constructed and required the demolition of some cottages, including a few on Long Row.

Nail making continued in the nineteenth century to provide a significant level of employment in Belper.  Towards the end of the century the failure to adopt new mechanised ways of nail manufacture led to a decline in the industry.  Other iron-related businesses also developed in the nineteenth century.  Carr & Bridges Iron Foundry, Smedley Brothers' Eagle Ironworks and Park Foundry manufactured a range of metal goods.

Throughout the nineteenth century Belper's mills continued to provide employment for the local population.  In 1897 the English Sewing Cotton Company was formed as a result of a merger between W.G. & J. Stutts and other mills.  The company went on to build East Mill in 1912.  The seven storey building continues to dominate the skyline today although it closed as a mill in the late twentieth century.  Competition from synthetic fibres and overseas yarn manufacturers caused Belper's spinning industry to decline after World War II.