Towards the end of the seventeenth century, waistcoats and knee-length coats had replaced the doublet in menswear. Lace or linen frills extended beyond the cuff of the coat and a cravat was worn around the neck. 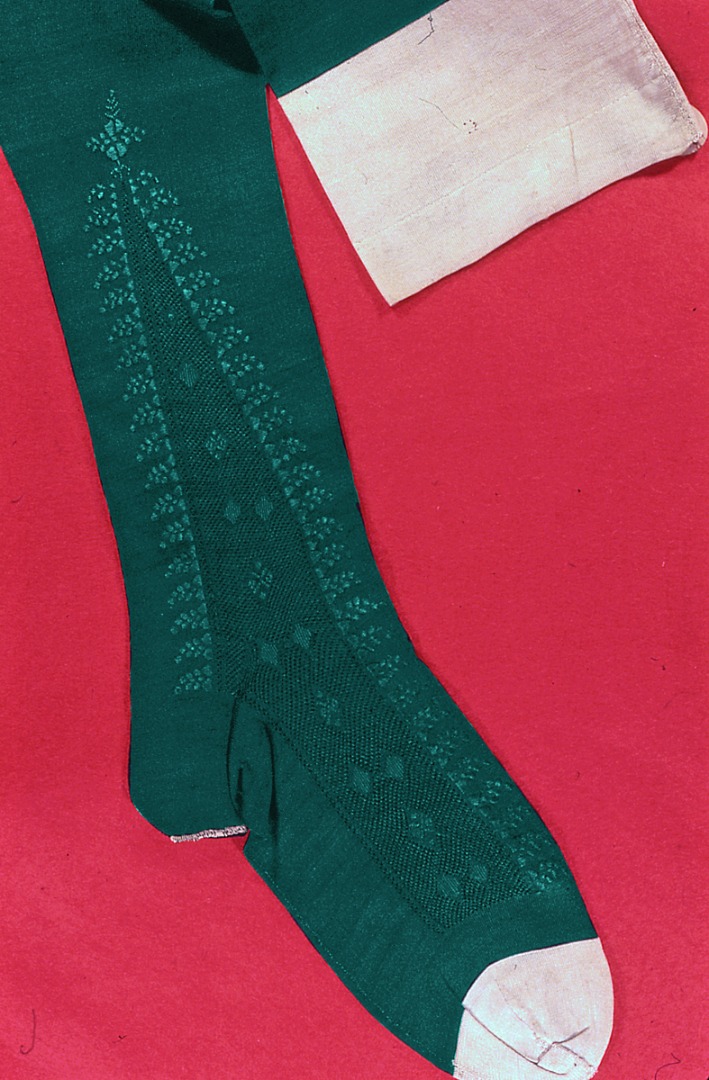 Wigs were commonly worn from the time of Charles II, starting with shoulder-length wigs with ringlets and moving in the 1720s to shorter wigs with curls to the side and a shoulder-length tail.  Breeches were tighter fitting and extended to below the knee.

Stockings were either gartered below the knee or pulled up over the breeches to above the knee.  Black and coloured silk stockings continued to be worn by the rich until the 1730s.  Gore clocks also continued to be popular.  Worsted stockings kept the less well-off clothed and were often dyed blue using cheap indigo dye.  In the 1730s the fashion for coordinating stocking colours and suits or dresses declined and white stockings increased in popularity.

In the second half of the eighteenth century, knee-length coats no longer covered the front of the legs as from waist level they sloped away to the sides.  A variety of collars also became popular on coats, including stiff upright 'standing collars' and turned 'stand fall' collars.  Decorative embroidered coats were worn by the wealthy until about 1780 when fashions became plainer.  Beneath coats, the waistcoat reduced in length to waist-level and frilled shirts were worn.  Breeches still reached below the knee, but the waistband tended to be higher.

Jedediah Strutt's invention of the Derby Rib frame in 1758 enabled the production of ribbed stockings.  The frame alternated the right side and wrong side of the fabric face across the wales and created a close fitting garment.  The invention of the warp frame in 1776 allowed a separate thread to be used for each needle.  The frame knitted courses by moving threads from side to side and was often used for the production of stockings with zigzag stripes (known as Vandyke stockings).  Cotton stockings also became popular for their fineness and pure white colour.

Women's fashion saw the return of dresses supported by under-petticoats with cane or whalebone hoops sewn in.  The dress often consisted of a gown with a low cut bodice open at the front to reveal a stomacher (a stiff panel, usually triangular in shape inserted in an open bodice).  Towards the middle of the century designs became elaborate and included frills, patterned fabrics, ribbons and lace trimmings.  Shawls, cloaks and scarves were worn over dresses when outdoors.  Hooped skirts made it difficult to wear long coats.

From the 1780s women's fashions matched men's fashions and demanded simpler designs.  Excavation of Greek and Roman sites provided inspiration for garments with a classical influence.  The chemise dress had a low neckline, high waistline gathered under the bust and a straight-hanging skirt.  The sleeves were often tight and extended to between the elbow and wrist.  Dresses were long, to the ground or the foot, for much of the century, but were sometimes shortened to above the ankle in the 1770s and 1780s.  The visibility of the ankle brought more elaborate stockings, such as those with lace clocks, into women’s fashions.  Framework knitters who produced stockings with lace clocks were able to earn up to three times the wage of those knitting plain stockings.

A knitted 'stocking purse' became popular during the century for carrying money.  More elaborate versions were knitted in silk and finished with tasselled ends and metal slides.