The early nineteenth century saw the development of a men's fashion that had devastating impact on the knitting industry. Trousers were widely worn in place of breeches and stockings were no longer required to cover the lower leg. 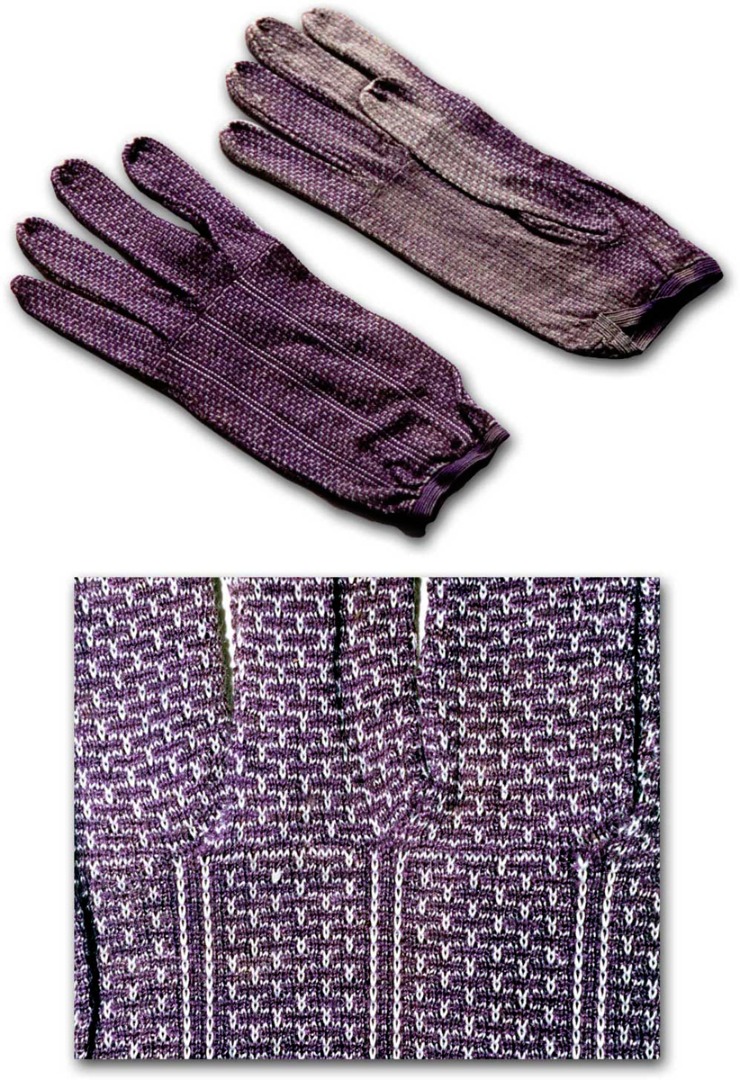 Half hose were worn to provide a covering over the lower leg, ankle and foot (Half hose were effectively a half-length stocking with a welt).  William Gardiner noted that '…short knee'd breeches were laid aside for the sailor's trousers.  This alteration had a great effect upon the Leicester Trade.  Stockings were shortened into half hose…This circumstance entirely destroyed the manufacture of those beautiful and curious stockings, which till then, fashion was constantly changing with the utmost variety'.  Towards the middle of the nineteenth century half hose and socks developed.  Ribbed tops that survive on socks today replaced stocking welts.

On the upper body, shirts gradually lost their frills as they became closer fitting and decorated with vertical pleats. Stiffened high standing collars and cravats were worn around the neck.  Waistcoats in striped designs remained popular and were visible from beneath the tail coat.  Eighteenth century tail coats had sloped from the front of the waist down to the tails, but during the nineteenth century the front of the coat was cut square above the waistline.  Doubled-breasted fronts and 'M'-cut collars were also introduced.  Frock coats were also introduced in the early nineteenth century to offer a further layer of protection against the elements.  The coats were single-breasted, close-fitting at the waist and had a full skirt reaching to knee-length.

For women, the classically influenced dress continued in fashion during the early decades of the century.  The waistline that started below the bust gradually lowered to the natural level of above the hips.  Two forms of bodice developed, one that gathered at the centre front waistline and another that was fitted to the body shape.  Sleeves became more decorative and puffed on the upper arm.  Below the waistline, dress skirts widened to balance the puffed sleeves on the upper body.  Petticoats were worn to spread the dress outwards.  Printed cottons were popular for daytime wear and silks and muslins were often worn in the evening.

The broadening dress shoulders required a more flexible form of outerwear.  Cloaks, shawls and scarves were wrapped around the shoulders to provide additional warmth and protection in poor weather conditions.  Wide-rimmed bonnets with bows, ribbons and flowers were worn on the head.

Shorter skirt hems in the 1820s and 1830s continued to create demand for stockings.  The declining demand for stockings in men’s fashions meant that hosiers competed for the women’s market.  Brooks & Co of Nottingham and Derby offered 20% discounts on their stockings.  The Napoleonic Wars reduced silk supplies and cotton stockings became a popular replacement.  Openwork (lace-like) designs were knitted into the stocking round the front of the foot and shin.  Stockings with coloured embroidered designs were also widely worn.  Flesh coloured stockings became fashionable in the 1820s: ‘Ladies who wish to have their feet well dressed, wear very fine stockings of open work; but, lest they should suffer from the cold, they have underneath very long stockings of flesh colour, which serve as drawers, and are tied to the waist like those of children’.  However, skirts lengthened to the ground in the 1840s and stockings became more or less invisible again.