Men's fashions of the sixteenth century continued into the seventeenth century, but with more elaborate designs. The doublet became more decorative with slashes across the chest and sleeves that revealed the shirt underneath. 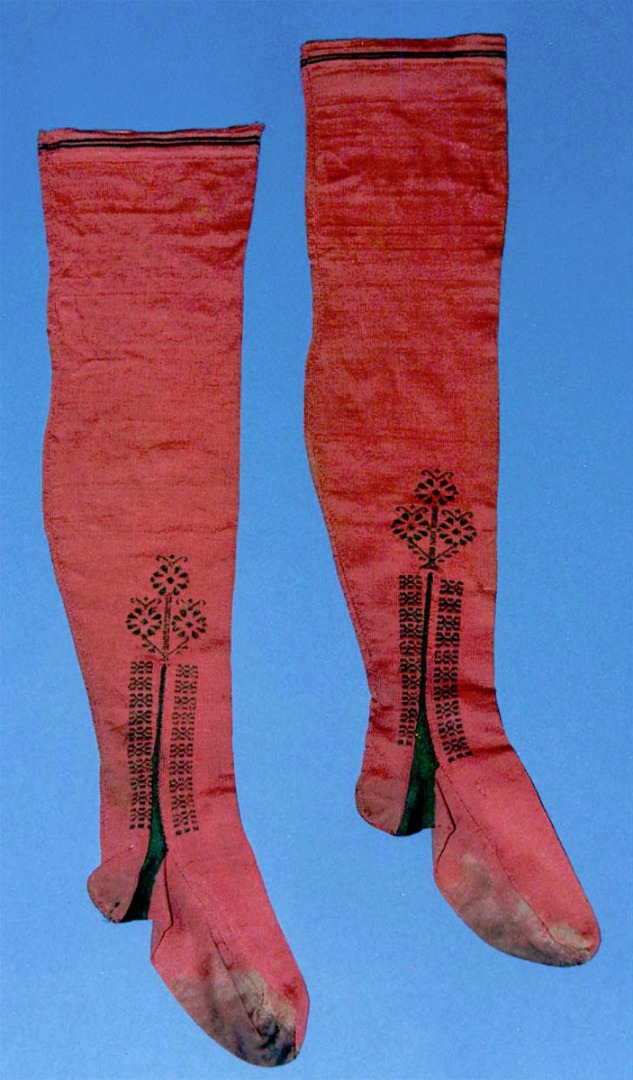 Fancy silk stockings that made slightly later in the Eighteenth Century

The skirts of the doublet shortened revealing the breeches, worn from the waist down to the knee.  Stockings covered the lower leg from above the knee to the foot and were often worn with strap garters buckled below the knee.  Only the rich in society wore expensive decorative silk stockings while woollen stockings were more widely affordable.  To protect delicate silk stockings when wearing boots, a pair of over-stockings with lace frilled tops was often worn.

Hand knitted stockings continued to be produced despite the introduction of the knitting frame.  The cost of the frame and the demand for customised stockings helped to keep hand knitters in work.  Leg shapes, colours, patterns and clock designs were easily varied to meet the requests of the customer.  Scarlet and grey were popular colours in the early seventeenth century.  Woven stockings were also widely worn at this time.

The Civil War brought about a change in fashions and the extravagant designs of previous generations were replaced by simpler designs.  Plain stockings without embroidered clocks became popular.  Embroidering was a slow task and formed a bottleneck in the manufacturing process, without it stockings were completed more quickly.  The plain stockings were produced in a variety of colours including white, pea green, yellow, and peach.  In the late 1660s the doublet was replaced by a coat and waistcoat.  About 1670 to 1680 it became fashionable for the stocking colours to match the colours of other garments worn.  Many of these were knitted in London where the main buyers lived.  Framework knitters in the East Midlands competed by producing high quality fine silk stockings that weighed only 4oz a pair.

The decline of boots and the rise in popularity of shoes during the reign of Charles II brought about the end of boot over-stockings.  Shoes encouraged the development of stockings with decorative designs around the lower leg and ankle.  A wedge-shaped piece of fabric known as a gore was knitted into the stocking between the heel and stocking front.  Often the gore was knitted in a contrasting colour to the stocking and embroidered designs (gore clocks) were added around the gore.

Improvements in knitting frame technology widened the range of objects produced on them.  Waistcoats of silk were frame knitted and decorated, sometimes being co-ordinated with a matching pair of stockings produced in the same thread.  Breeches and gloves were also produced using fabric from frames.  Nightcaps of silk or wool were knitted with side straps that were buttoned under the chin.

Women continued to wear sixteenth century fashions in the early seventeenth century.  Generally a stiffened bodice was worn with a skirt which, however, lost its supporting farthingale by about 1620.  Ruffs were replaced by falling collars.  In the 1680s both the bodice and the skirt became undergarments under a loose fitting gown.  As it tightened up in the late seventeenth century the gown became more open in front to reveal a decorated bodice or embroidered stomacher (a triangular panel from bust to waist) and a more or less richly decorated petticoat.  As they were rarely seen, stockings were plain or with simple decoration.  Women as well as men wore gore clocks.  Knitted petticoats were introduced during the century but were rare.