Abraham Orsini Anderson commenced business in the front room of his home in Leicester around 1916. 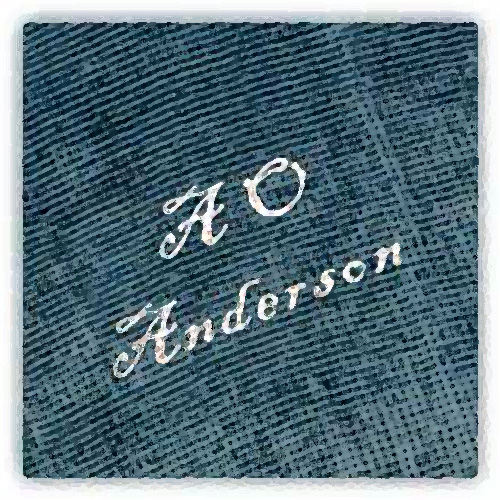 As a freelance 'bag knitter' he received yarn from firms such as B Russell and J Leeson, and knitted this into balaclava helmets on a hand powered purl knitting machine that he owned; he was paid for the transport and labour.

Five years later he took over an old coffee shop and brought other family members into his firm.  They knitted and made-up complete 'all-wool' children's garments and sold these to wholesalers through an agent.

In 1930 Abraham Anderson moved to larger premises and soon employed around 20 employees; twelve were 'hand flat' knitters, one man for each machine.  It was around this time that the firm first produced for BHS. Abraham was a traditionalist who was averse to change, he just believed in solid 'hard work'.  Further expansion took the firm to larger premises at 32 Belgrave Road, Leicester.

In 1953 a granddaughter and two grandsons formed a small separate firm (Lindawn) in a garage in De Montfort Street, having purchased one power machine which they worked for eighteen hours per day.  Soon three more machines were in action.  A single knitter, working the four machines, was able to produce 30 dozens per day - a dramatic improvement in productivity and after Abraham had eventually become, rather reluctantly, convinced of the efficiency of the new technology, the two firms were amalgamated on a partnership basis in 1954.

The post war era saw many changes in the industry.  AOA formed a wholesale outlet Hans Andersen (spelt the original way), distributing to around 700 shops in the UK using the Hans Andersen brand name.  At various times customers included Boots, Mothercare, BHS and M&S (supplied from the factory) and a complementary range of children's garments made by other manufacturers and sold through Hans Andersen.

Success forced a move in 1964, this time from the inconvenient three-storey Belgrave Gate factory to a brand new site in Market Harborough.

In common with much of the hosiery and knitwear industry the early 1970s was the most successful time for the firm.  Soon the family began to notice the change in the supply chain; the globalization of trade and increasing imports, the weakening of independent outfitters and small shops and its adverse effect on the wholesalers, and the growing strength of high street stores who demanded dedicated production from the large manufacturers.  These problems were compounded by yarn suppliers who demanded faster payment and customers that required longer settlement terms.  At a time when Andersons would have been helped by larger orders and longer production runs the business became more complex and the orders became smaller.

This small family firm responded to these knocks by selling floor-space and, with deep regret, reducing the numbers of their loyal workforce including some family members.  But these moves were insufficient. In the period 1980-1985 the industry lost 18,000 workers.  And it was in this harsh economic climate that A O Anderson, a family firm through four generations of specialist babywear manufacturing, finally closed in 1985.