The origins of Atkins of Hinckley can be traced back to Robert Atkins, son of a yeoman farmer. Robert was baptised at Newbold-on-Avon, Rugby in 1702. 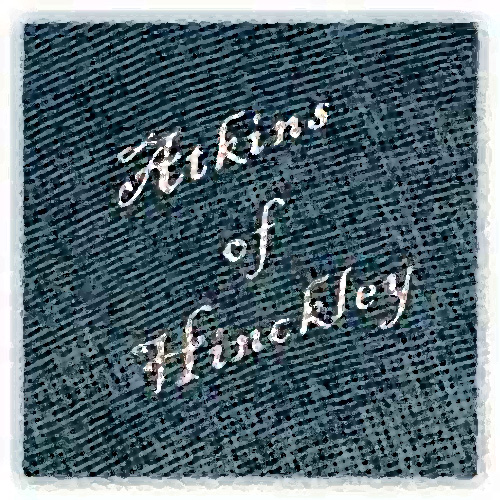 In 1715 he was apprenticed to a Brother of the Framework Knitters of London and in 1722 he commenced the business in Hinckley. This was in the era when knitting was a cottage industry and drew much of its wool from the local area.

A century or so later times were hard and many of the Hinckley citizens were starving. However, business improved and in the 1850s and 60s prestigious customers included Corah & Son, I & R Morley, George Brettle, Richard Lunt, J H Ryland and Wilkinson & Riddell.

Many members of the family worshipped at the Unitarian Chapel. The family was noted for its philanthropy and interest in public affairs. Thomas (1832-1911) and Hugh (1838-1911) were founder-members of the Cottage Hospital. The Library was presented to the town by the family in memory of Arthur (1840-1882) and John Beale Atkins (1829-1908) who was a staunch Conservative, and a member of the Atherstone Hunt.

Around 1845 the trade gradually moved away from being just a cottage industry as mechanization took over and Atkins expanded in this era. The large Bond Street factory was built in stages between 1895 and 1910 with subsequent expansion at Nuneaton and, for underwear production, at Regent Street Hinckley around 1928. This factory which had retail shops on the ground floor carried a large 'High Cross' sign (one of the firm's trade marks). The Druid Street, Hinckley factory was added in 1931.

In common with most of the industry there were difficult times during the 1930s and, for Atkins, a serious cash flow problem, but this was slowly resolved and the business progressed so much that on the eve of war orders were placed for American fully-fashioned machines to increase the firm's production of pure silk, rayon mixture and lisle. However, with the war came a reduced labour force and a reduction of the floor space that the firm was allowed to keep for its own production.

The post war years were good for the firm and by 1953 employment had reached 1250. Originally the firm had been a partnership but in 1929 was converted to a private limited company and in 1950 became a public company.

The 1950s saw further progress. Although the firm had produced under several brand names including Vanesse, Princess Ide, Whispa, and Everlast, it was in this period that the firms advertising was concentrated on the two most successful brand names, Lucky Charm and Highcross and the firm moved successfully into supplying the chain stores and multiple outlets which had gained a strong hold on the clothing industry.

An important fashion change took place within the trade in the 1960s with the almost total elimination of fully-fashioned stockings which caused redundancies but the firm prospered again with the introduction of tights.

By the early 1970s the industry was under threat from the increase in imports. In corporate defensive moves in the 1970s and 1980s Atkins closed several sections and diversified into property-development and electronics. Until 1990 Atkins was still engaged in essentially the same business and was reputedly the oldest surviving independent knitting firm in the world. A significant feature of the firm was the continuity of the family management, the final member of the family in the firm, Tom Atkins retired in 1994.

In the following year the firm, then in its 273rd year, passed into the ownership of Coats Viyella Plc.