A worse start can hardly be imagined than that suffered by Nathaniel Corah and yet he went on to establish what eventually became one of the most prestigious firms in the UK hosiery and knitwear industry. 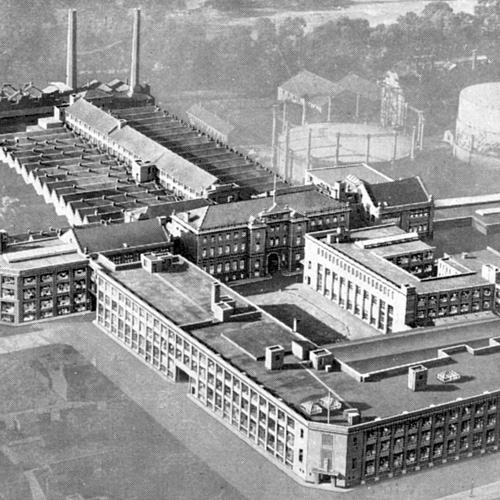 He was born at Bagworth, Leicestershire in 1777, where his father earned a living by combining farming with framework knitting.  Nathaniel set up as a framework knitter when he was twenty seven, but after seven or eight years he struck hard times and he was put into a debtors' prison.

On release Nathaniel found work in a Birmingham gun factory, but after Napoleon's defeat at Waterloo he was again unemployed.  He returned to Leicester and successfully set to work buying goods from local hosiers at the Globe Inn and his home in St Nicholas Street, for resale in Birmingham.

In 1824 he bought a warehouse with manufacturing space in Union Street.  The business prospered but Nathaniel died in 1832 aged only fifty-five.  The business expanded under his sons and by 1845 they had a factory in Granby Street that was powered by a steam engine.  In 1866 further expansion saw the opening of the St Margaret's works and in 1883 electric lighting was installed there.

The trade mark St Margaret was registered in 1875.  By this time the firm was producing basic knitted goods plus football jerseys, cardigans, bathing wear, yachting wear, infants socks, capes, gaiters, and other styles in large quantities.  Progressively more branches were opened, but during the First World War half of the male staff went into the forces and forty lost their lives.  Over 70% of the production that remained was government contracts.

The firm had enjoyed a long run of success but suffered a devastating setback in the 1920s and 1930s.  Profit margins were negligible and huge losses were incurred on stocks.  The firms nationwide warehousing was run down and closed and there was short time working and workers were laid off and it was only through the successful connection with a new customer Marks & Spencer in 1926, and by making stringent economies, that the firm managed to survive and actually expand.

The nature of the relationship with Marks & Spencer is central to the Corah story.  From 1926 a relationship developed in which the firm became almost an extension of the customer.  The traditional form of trading through wholesalers gave way to direct delivery to the high street chain stores.  Quality was paramount and customer service was given priority over everything else.

Progress was interrupted again when war broke out in 1939. Over 2000 employees left for the armed forces or other vital work.  At the end of the war the firm had been reduced to half its pre-war labour strength, had worn out equipment, had one third of its floor space allocated to other purposes and expansion was limited by complex planning regulations.

The shortage of workers after the war forced the firm to expand in new areas such as Brigg, Bolton-upon-Dearn, Oakham, Aberbargoed, Scunthorpe, Rochdale and Birmingham.  Corah, by 1965 employed 6500 and was a leader in industrial relations, training, workers pay and conditions, and technical expertise.

However, from the mid 1970s the UK industry was in decline. Corah's sales trebled but profits were stagnant.  Corah plc was committed to UK manufacturing in an era of global trading and began to feel the pressure from imports, particularly from the mid 1980s.  There had always been members of the Corah family on the board of the firm, the last chairman, fourth generation Sir Nicholas Corah, retired in 1989 and in that year the loss making firm was taken over by Charterhall plc but within a short time Corah was disbanded and broken up.