Arthur Foister was the son of Charles, owner of a sock factory at Thurmaston, and the grandson of 'bag hosier' Thomas from the same area. 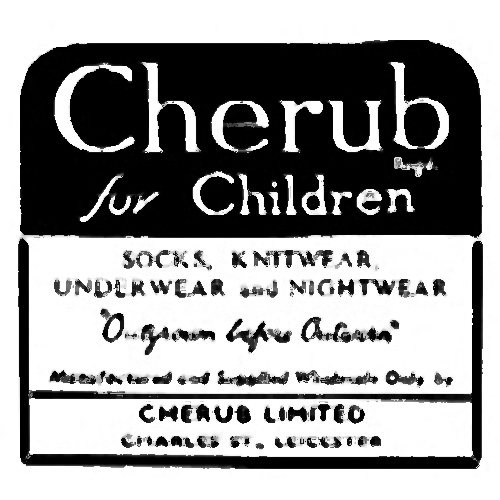 Aided by a £300 loan from his wife, Arthur went into business on his own account founding Arthur Foister Ltd in 1903. The business progressed, operating in Morledge Street and then St James Street, Leicester. The name of the firm was changed to Arthur Foister & Sons Ltd in 1928. A brother, Maurice C Foister, later formed the large midland hosiery and knitwear manufacturing firm Foister, Clay & Ward that specialised in production for the emerging chain stores.

Further progress took Foisters to an impressive factory in Charles Street, formerly owned by Kendall. Although the firm made some adult clothing it built on the family tradition, manufacturing clothing for children and used the brand name 'Cherub'.

Arthur Foister's interests were not confined to the hosiery and knitwear industry as he also owned a farm adjacent to Brooksby Hall, Leicestershire. He maintained a very comfortable home, 'The Berrystead', at 1001 Melton Road Syston which was built for the family in 1922. All his sons were educated at Oundle School. However, Arthur maintained a relatively modest lifestyle shunning expensive motor cars or any form of ostentation.

With the outbreak of war in 1939 there was a shortage of workers when many entered the armed forces. However the firm survived by making underwear for Ministry of Defence contracts and a small amount of civilian clothing which was rationed at that time.

Following the war there was a shortage of goods in the shops and when rationing ceased progress was rapid. The popularity of the firm's products motivated the change of name in 1945, this time to Cherub Ltd which linked the product to the firm. Backed by extensive advertising, Cherub goods continued to be supplied through the wholesale trade. Wholesaling was still thriving at that time as was the private retail sector, which operated price maintenance agreements throughout the UK. However change was inevitable as the retail scene shifted in favour of the chain stores and Tesco began to under-cut the private retailers' prices by around 15% for Cherub branded goods.

In the post-war era control of the business was in the hands of three directors. All were sons of the founder. They had defined responsibilities: John was responsible for underwear, David for knitwear production and technical issues and Roger for administration. All three sons became masters of the London 'Worshipful Company of Framework Knitters'.

The directors had been aware of the problems facing the UK hosiery and knitwear industry from the mid 1970s but the firm, unlike many others, maintained its long run of success right up to the early 1990s. Inevitably the impact of cheap foreign imports took its toll. It was cheaper to import the finished fabric from which Cherub underwear was made than to buy the yarn in the UK. Low-cost imports created an untenable situation for the whole industry. The family firm eventually closed in the early years of the twenty first century.