John Pick, the founder of J Pick & Sons, was born in 1820 into a Barrow on Soar family of framework knitters. As a young man he foresaw the demise of the hand frame and went to Derby to learn the new 'factory' methods of production. 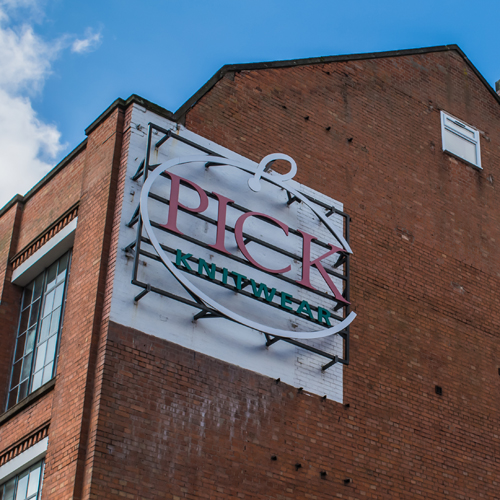 His business was established around 1856 in rented premises in Friday Street, Leicester, and by 1863 it was listed as a Fancy Scarf and Hosiery manufacturer. In 1868 he moved to his own factory in Paddock Street. After a very short time the firm was concentrated entirely on the production of knitwear. There was a later move to Wimbledon Street where the firm, by now J Pick & Sons, manufactured the cardigan that became popular during the Crimean war.  Later they added polo neck sweaters, which were popular as sportswear at the turn of the century.

The firm prospered and from 1913 was based in an attractive purpose built factory in Dover Street. The years between the two World Wars were the most successful. The firm was dedicated to the production of knitwear bearing its own brand name, Pick. This was promoted through the UK wholesale trade to the thousands of independent stores then in business throughout the country and through agents in the British Empire and the Mediterranean area. This era was successful for the family who lived in the then fashionable St Peters Road and later in a large house in Knighton Rise. There was a Humber car and later a Daimler with a chauffeur. J Pick & Sons reached a high-point in 1939, just before World War Two.

The war was a setback for the knitting industry with many workers leaving to join the forces or going into other occupations. After the war the firm did not repeat its former success. There continued to be a shortage of knitting yarn and workers and clothes rationing continued for some time. Under the fourth generation managing director, David Pick, the firm remained loyal to its own brand and the independent retailers. Significantly, it did not embrace an opportunity to deal with Marks & Spencer. Picks had always concentrated on menswear but in a break with tradition they also supplied British Home Stores with a range of boy's and women's knitwear. A venture in supplying cut price merchandise to Poland proved less profitable. However, Picks did achieve success as a supplier to Tesco, Littlewoods, and C&A and gained large contracts from the Ministry of Defence.

In the period between the wars the industry had benefited from a rise in the popularity of knitted products and a substantial degree of government support in the form of tariff protection. In contrast, this level of tariff support was not followed up after the Second World War much to the chagrin of David Pick who unsuccessfully lobbied the government for stronger protection for the industry.

In the early 1980s the firm, in common with many others, found business very tough. The demise of the small retailers and increasing low-cost imports affected the firm and there were major job losses in the industry at that time. From 1973 to 1983 the industry lost thirty three thousand workers. A short-lived increase in Ministry of Defence orders accompanied the Falklands War but ultimately Picks shared the fate of hundreds of other manufacturers and after a long hard struggle closed for business in 1991.

The firm was controlled by the Pick family throughout its entire existence and included fifth generation family member Alison Pick who became a director and company secretary. The factory premises have now been converted into up-market living accommodation and can be seen at the corner of Dover Street and Wellington Street, Leicester.