Robert Rowley was born in 1846 and commenced business as a home frame-knitter in Wigston Street, Leicester in the early 1860s. 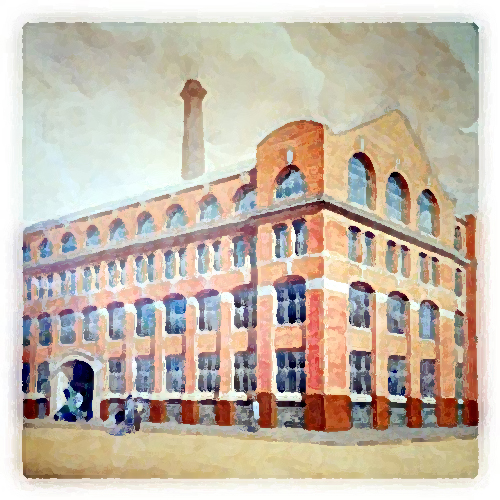 He was 21 when he established R Rowley & Co in Queen Street in 1867, in a small building on the site of a wood yard (where his father worked when the two first came to Leicester from Wisbech). When Robert Rowley died in 1936 he left an estate of £813,931, a considerable fortune for those days.

From small beginnings the firm progressed and in 1891, by which time power operated plant had become available, Rowleys were using the latest machinery and the factory, which was close to densely populated areas of central Leicester, was attracting an expanding work force.

However, on the night of 5th October, 1911, together with a nearby timber yard and St Georges Church, the factory sustained one of the worst fires of the era in central Leicester. The firm recovered rapidly and the impressive new factory building, completed in 1913, was extended to St George Street in 1915. The internal structure included the use of reinforced concrete columns, beams and floors. Robert Rowley may have been motivated to incorporate the new building medium by the fear of another fire. At various times Rowleys also had factories at Fleckney, Derby, Oadby and Coatbridge in Scotland.

During the First World War the firm had full order books and was kept busy with military contracts. After the war there were set-backs, but the firm emerged from the devastating world-wide depression of the 1930s as a very successful business, and in the early 1940s was the third largest employer in the hosiery and knitwear industry in Leicester, exceeded only by Corah and Wolsey.

During the Second World War the firm again concentrated on military contracts and part of the Queen Street factory was turned over to the Ministry of Aircraft Production. However, in the 1950s, the firm suffered from the decline of its fully-fashioned knitwear business and the total closure of its fully-fashioned stockings section. Unfortunately, due to lack of capital, the firm was unable to move production into the more fashionable seamless stockings.

Although relatively large by the standards of the industry, this multi-product firm was never a market or fashion leader in any single product, neither did it own a leading brand name, although the sock production, bearing the 'Peter Pan' trade mark, was considerable. Throughout its independent existence it supplied its merchandise mainly to the wholesale trade. However, in the 1960s, the decline of thousands of small independent retail stores was recognized, and, in response, strong links with the expanding high street stores were established.

The family connection was finally severed in 1962 with the retirement of Mr Leslie C Robertson, grandson of the founder. Sir Geoffrey Barnett was then appointed chairman. The firm did not regain its former success, and after a series of poor trading results, the business was acquired by Courtaulds in 1968.

The victim of competition from low cost countries, Courtaulds closed the Queen Street - St George Street manufacturing site in 1999, and under new ownership the property has now been restored, minus its tall chimney, and converted into a residential apartment building.